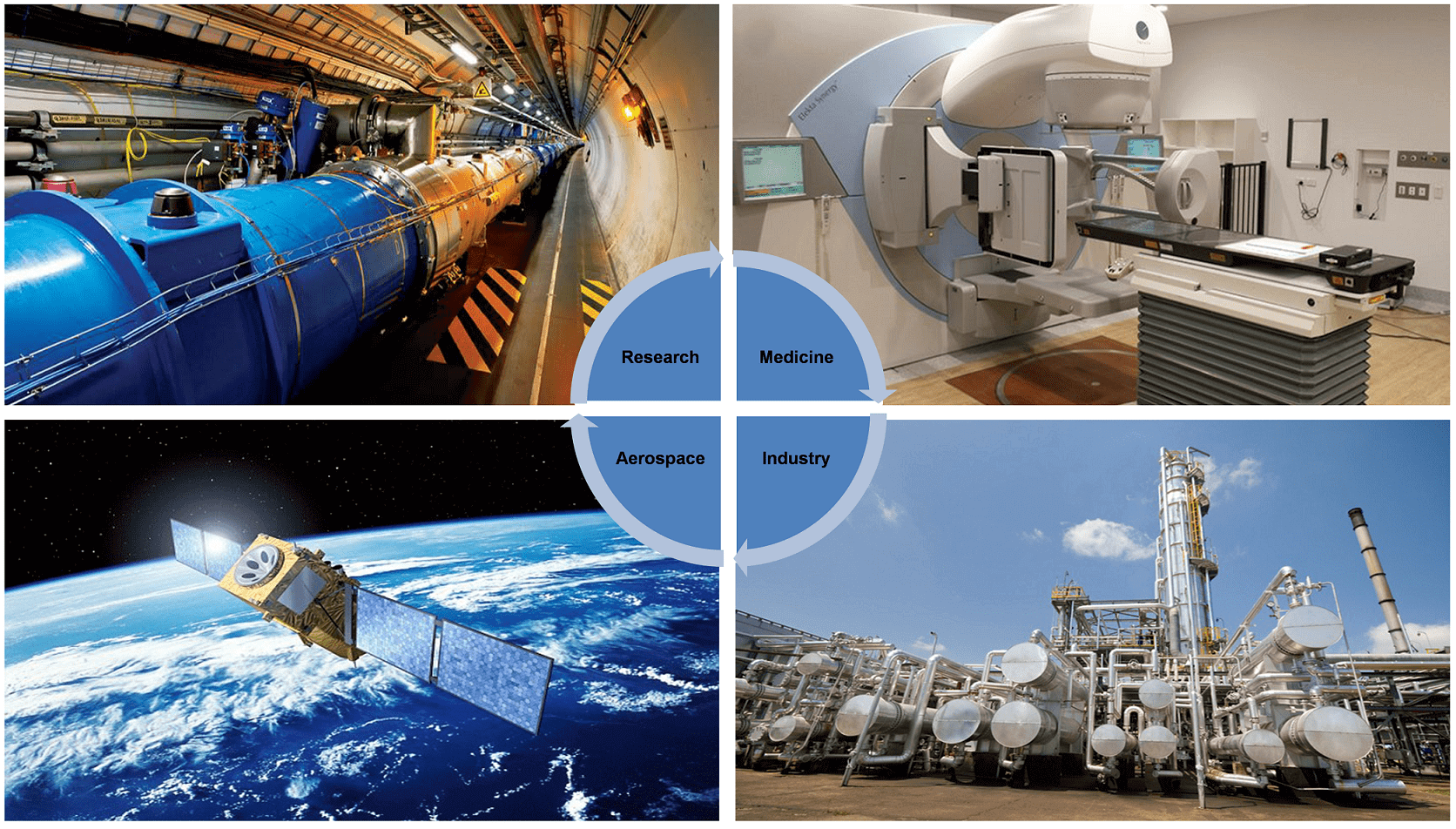 Ionizing radiation can be encountered as natural (background) radiation originating from cosmic rays or naturally occurring radionuclides, or as radiation emitted by man-made sources. Ionizing radiation has found numerous applications in industry, medicine and research.

Monitoring of ionizing radiation exposure is accomplished with radiation dosimeters, composed of radiation sensors (detectors) and signal processing electronics. Semiconductor devices (e.g. MOS transistors and various types of diodes) are increasingly used as sensor elements, as active (electronic) dosimeters are becoming more popular and are replacing their traditional passive counterparts. Operating principle of electronic dosimeters relies on measurement of the change of electrical properties of the sensing elements due to radiation. This field of research has a significant and growing commercial potential, as shown in table:


With the technological downscaling, the radiation-induced effects are becoming a major threat to the reliable operation of electronic devices, circuits and systems not only in radiation environment but also for mainstream terrestrial applications. Although it has traditionally been a major issue only for space electronics, it is nowadays well established that the ionizing radiation may severely affect the electronic equipment at terrestrial level (e.g. electronics in automotive applications or medical devices, such as pacemaker, may be affected by atmospheric particle radiation). For that reason, the design of electronic instrumentation for radiation environments also for safety critical terrestrial applications requires efficient radiation hardening measures.

Electronic instrumentation for ionizing radiation environments (including also electronics used as an integral part of dosimeters, i.e. read-out circuitry) is generally composed of sensing, data processing, communication, storage and visualization modules, and can be implemented as standalone or distributed. As the functionality and specifications of a particular radiation monitoring system depend on the specific application, and due to different effects caused by different types of radiation, the design of electronic instrumentation for ionizing radiation environments requires a synergy of multiple research disciplines such as Physics, Electronics, Microelectronics, and Software Engineering.

The EU partners involved in ELICSIR consortium will provide complementary expertise covering multiple research topics related to radiation effects relevant for electronics instrumentation, from modelling and simulation of radiation-matter interaction to design of customized systems for application in different radiation environments. In addition, the EU partners possess complementary experience in relation to exploitation of radiation research results in a wide range of applications in medicine, industry, and space research. This experience and know-how will be transferred to the EF-UNINIS researchers through a coherent and comprehensive set of project actions.

In the proposed ELICSIR project, we intend to employ a unique multi-scale approach based on the combination of the expertise related to radiation dosimetry and the expertise related to rad-hard design. We envisage that such approach will contribute to the significant and sustainable enhancement of the scientific excellence and innovation capacity of EF-UNINIS. While the project is certainly focused on EF-UNINIS, the three supporting partners will also benefit from increased research interactions in the project and enhanced visibility through dissemination actions.

Based on the SWOT analysis and expected impacts of the WIDESPREAD-03-2018, the specific objectives of ELICSIR project have been defined as follows:

The ELICSIR project is aimed at achieving significant improvement of the scientific, networking and educational capacity of the EF-UNINIS in the field of modelling, simulation, and characterization of ionizing radiation effects in electronic devices, circuits and systems. This will be accomplished through linking with the three established, research intensive EU counterparts (TYN, IHP, and UGR) which have complementary scientific profiles and expertise in relation to ionizing radiation research. Moreover, the project will facilitate the knowledge transfer among local and regional scientists and professionals, as well as the interaction with the target public groups, aiming to strengthen the overall research and innovation potential of the region in relation to study of ionizing radiation effects and implementation of ionizing radiation related technologies. As some project activities are closely related to commercialization of research results, it is envisaged that the project will result in increased commercial engagement of EF-UNINIS in the area of characterization of radiation dosimeters. In addition, the project activities will be focused on establishing the conditions for a long-term sustainable research at EF-UNINIS.

Specifically, the expected impacts are:

To fulfil the ELICSIR project objectives elaborated in the previous sections, we propose the following activities: 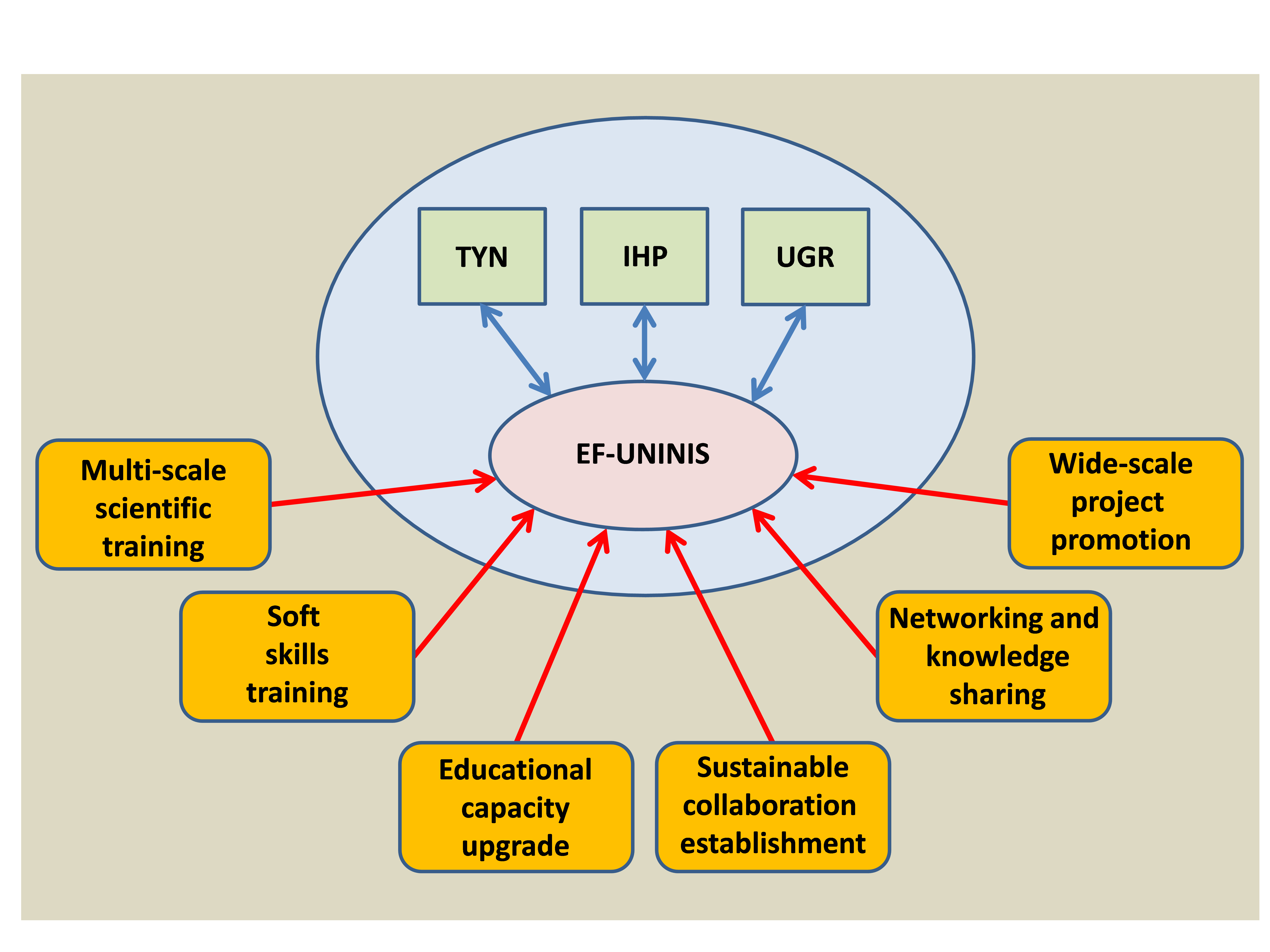 The ELICSIR project is planned for the duration of 3 years. In order to accomplish the proposed objectives, the work plans will be organized into five work packages (WPs), as follows